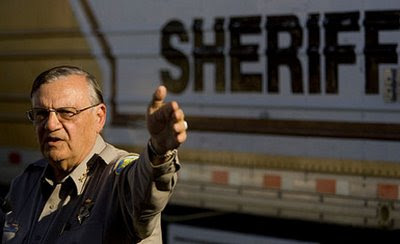 The lawsuit profiles the Sheriff's Wild West brand of racist vigilantism, with the Sheriff plaing to hometown bigotry and illegally detaining and searching US citizens and legal residents who appear to be Latino. You can find the complaint here.

Here are some scenarios the lawsuit describes:

1) Arpaio ordered his deputies to detain and arrest Latinos who were in an area populated by day laborers as retaliation for community protests against these policies. "In an apparent effort to suppress the Pruitt store protesters' exercise of their First Amendment rights, Arpaio announced that he would continue to patrol the area until the protests ended" (pp. 13-14).

2) "Arpaio praised as 'patriotic' the private groups, including the American Freedom Riders, that...had been harassing all Latino persons entering and leaving [a] legal center" (p. 14).
This is the equivalent of conservative politicians in pre-Nazi German pandering to the brown shirts by informally deputizing them and tacitly supporting their thuggery directed against Communists and Jews.

In fact, most of Arpaio's actions resonate with events during the transition era of the German goverment in 1932, when a country compensated for its loss of stature in international and specifically military arenas by bullying its own citizens. Can't beat the French? Then attack the Jews. Can't beat Al Qaeda? Harass Latinos.

3. A Mexican citizen was visiting with a legal visa and in a car with other Latinos. The car was pulled over supposedly for speeding but a ticket for this was not issued. Instead the Sheriff's officers searched, arrested and handcuffed Mauel de Jesus Ortega Melendres without probable cause and after he had shown them his valid legal documents. Weirdly, he was ridiculed as a sex pervert, then held for nine hours without food or drink, and eventually released after an ICE agent approved the documents. His hands were bruised and painful from the handcuffs, which, despite his polite requests, were not removed or even adjusted (pp. 18-19).

4. Sheriffs had established a traffic stop to screen Latinos. Cars driven by Caucasians were briefly inspected and then allowed to pass through. The car driven by Mr. and Mrs. Rodriguez was held up as officers requested a social security card (p. 21).

As a result of these activities, Arpaio is charged with violating several laws. The most surprising law the ACLU charges Arpaio with violating is Section 287(g) of the Immigration and Nationality Act 8 USC 1357(g), which authorizes local law enforcement agencies to enter "memoranda of understanding" with the Department of Homeland Security to enforce some portions of immigration law.

The ACLU points out ICE itself has stated that the "'287(g) program is not designed to allow state and local agencies to perform random street operations'" and that "officers may only 'use their authority when dealing with someone who is suspected of a state crime that is more than a traffic offense.'" (Quoting from ICE Fact Sheet, Section 287(g) of the Immigraiton and Nationality Act (September 24, 2007), at http://www.ice.gov/pi/news/factsheets/factsheet287gprogover.htm). It should be pointed out that the prohibition against random street operations rules out the only possible defense Arpaio might have, which would be to say that his stops are not based on race: random stops are not allowed AND those based on racial profiling allowed. This means that there are no grounds on which officers are allowed to stop and investigate people for immigration violations absent probable cause.

In addition the suit charges Arpaio violated the Equal Protection clause of the 14th amendment, which invalidates racial profiling; the Fourth and Fourteenth Amendment's prohibition against unreasonable search and seizure; the Arizona privacy article of the Arizona Constitution; and Title VI of the Civil Rights Act prohibiting race discrimination in federally funded programs (since the Sheriff's office receives federal funds).

The suit is asking for judgments confirming their allegations as well as injunctions against further racial profiling and attorney fees as well as "such other relief as the Court deems just and proper" (p. 30).
Posted by jacqueline stevens at 15:37

jacqueline stevens
Professor, Political Science Department, Northwestern University. I teach political theory and write about law-breaking by ICE and the immigration courts for The Nation magazine. My book States without Nations: Citizenship for Mortals was published by Columbia University Press in 2009. It explores alternatives to our current laws that base citizenship on parochial, unjust ideas about birth, and shows how these laws are connected to other archaic practices inconsistent with liberalism, including inheritance and marriage. My first book was Reproducing the State (Princeton, 1999). For contact and other information, please go to jacquelinestevens.org.